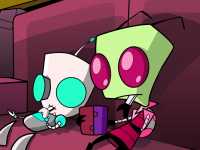 Just before Christmas, Nickelodeon was running commercials for the Christmas episode of a show called Invader Zim. The commercials featured the show's Christmas song which ran like this:

Bow down!
Bow down!
Before the power of Santa
Or be crushed!
Be crushed
By his jolly boots of doom!

OK, so how are you supposed to resist that? Anyway, after watching the program I discovered (or should I say our entire family discovered) that Invader Zim is one of the most brilliant TV programs ever made. The concept of the story is rather simple... an Invader named Zim from the Irken Empire is sent to Earth to scout out the planet and report back ahead of the upcoming invasion. That's Zim (with the red eyes) watching TV with his useless robot servant, Gir, in the picture up top. The Irken Empire destroys other planets for fun and in order to get their snacks. Actually the Irken Empire has no intention of invading Earth but the Almighty Tallest (the rulers of the Irken Empire is whoever is the tallest) hate Zim (because he is a screw-up AND he is short) so they sent him to earth to get rid of him. Zim disguises himself as a 6th grader (I told you he is short) and disguises Gir as a dog (that's Gir in his dog suit). Dib is a 6th grader who realizes that the new green student is actually an alien intent on destroying Earth. Gaz is Dib's sister and her major goals in life are to win at video games and annoy Dib. That is the show and madness ensues from episode to episode. Whether it is Zim turning Dib into bologna, ("No one should be this delicious!") or whether it is Dib defeating Zim with water baloons ("Score one for the human race, score nothing for the Zim thingy race!"), every episode is pure nonsense and insanity.

Gir: Oh, I left it at home.
Zim: You left what at home?
Gir: The guidy, chipy, thingy.
Zim: Why would you do that?
Gir: To make room for the cupcake! 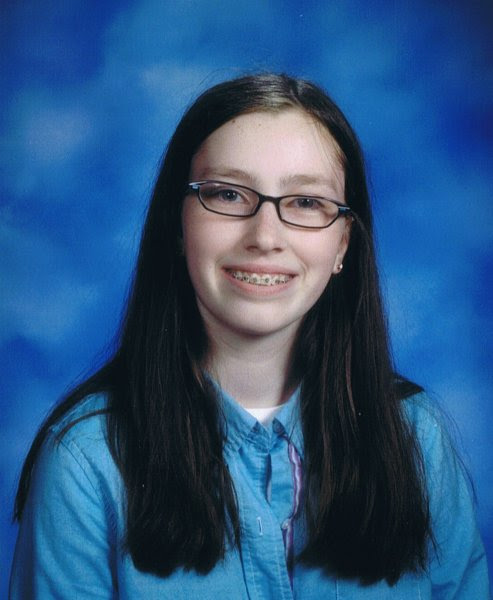 This has been a rough month for my daughter. She was dizzy at school and felt completely worn out so she went to the nurse and came home. She stayed home for a couple of days then went back but the same thing happened again. Off to the doctor and the doctor discovers that her spleen is enlarged. Yikes! That might mean mono! Off to the lab for a test, wait a couple of days, and the result is... not mono, in fact the tests reveal nothing of interest. Conclusion? An unspecified viral infection, maybe the same one that Michel has in her middle ear. We were back to the doctor today and things look better so anyway, tomorrow she goes back to school because she has missed enough.

Today was a hectic day. Michel was getting another pain shot so I had to take the morning off. But Mikey's bus was late. So I took Mikey and Michel over to the hospital, dropped Michel off, drove to Mikey's school, dropped him off, then went home, grabbed Beth and took her to the doctor, then went back to pick up Michel, and then took them both home, grabbed a Subway BLT with no "T" for Beth, then drove off to work. I got here at 1pm so I will be going home late tonight.

So how is Michel doing, you ask? Not too good. She thinks her shunt needs to be adjusted because she is not feeling right so she hasn't been back to work for a couple of weeks. And so it goes.

So they have cool little cars, impressive commercials, and wear nerdy looking clothes. They still suck. Twice I have gone to Geek Squad with a computer problem and twice I encountered a teenager who knows less about computers than I do. The first time was the disk problem... OK, I really didn't expect them to open up the disk and recover the data but I did expect them to make more than a minimal effort. In fact, the Geek Squad guy did nothing more than what I was able to do myself. He pulled the drive and put it in another PC where it still didn't work. Duh... I told him the disk was fried. I expected a little more like maybe swapping the electronics on the drive and seeing if that might do something. But that would have required some technical know-how and that does not seem to be what geek Squad is about.

OK, how about the second problem which happened last week with my daughter's PC. According to the lights on the back of the PC, the processor failed. So I called Geek Squad on the phone and they said, "Sure, no problem, bring it in, we can fix that." Well, actually after I dragged the PC over there I discovered that if I buy a new processor from Dell they will put it in for me. For $50. They wouldn't even bother checking the computer to make sure it really was the processor or even order the processor themselves. Putting in a processor may sound scary but if you can plug in a toaster without electrocuting yourself, you can put a new processor in a computer. It is about 5 minutes worth of work. So Geek Squad will be happy to put in the processor, with no guarantee that the processor is actually the problem, at the equivalent rate of $600 per hour. Nice work if you can get it.

They will install a hard drive at $40 (after you buy the hard drive). What does installing a new hard drive entail? Open the PC, slide the hard drive into a slot, and plug two cables into the hard drive. Close the PC and start her up. Less that 5 minutes work. They will install a memory chip for $30. Again, less than 5 minutes for you to do it yourself. They will install anti-virus software for $30 plus the cost of the software. Are you telling me that someone might own a computer and not know how to put a disk in their CD player because that is all Geek Squad will do for you. For $170 they will remove any viruses and spyware and add a firewall and some virus protection. $170!!! I cleaned up my sister's PC which was infected with both spyware and viruses without using anything other than some free anti-spyware software and 90-day free version of Norton.

Geek Squad is a rip-off. They charge outrageous amounts for the simplest work but are incapable of doing anything more than what anyone can do with just a little advice or assistance from a random teenager.