Notes from the Cat House 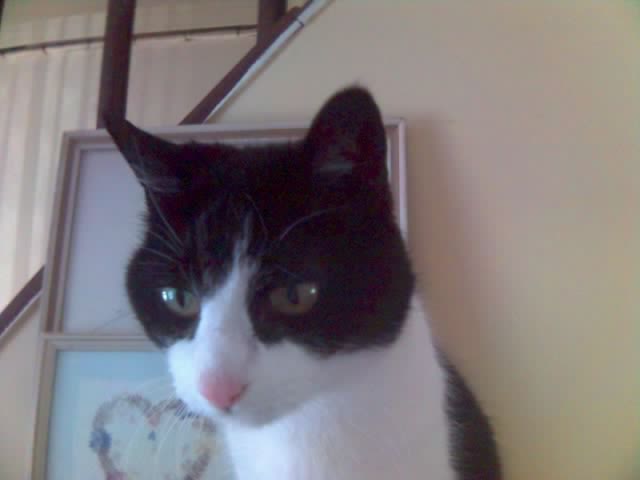 We have always had cats. When Michel and I married she had two cats, Bowie and Bounder. They both lived until they were 18. Cats do pretty well with us because we keep them indoors and take good care of them. Biggles (left) was a cat I found outside a bar when she was a kitten. She was a scrawny little thing covered in fleas (which she gave to the Bowie and Bounder). She was a funny cat and had psychological problems. She once lived in our basement for 3 months because she decided she was terrified of Bowie. We even had her on Prozac for a little while!

Anyway, Biggles was getting old (she was about 18). She had been staying in our bedroom almost all the time lately and didn't seem to be her normal self. And then one day about 6 weeks ago she disappeared and we haven't seen her since. Cats tend to go off by themselves when they are sick so we think Biggles may have sneaked out to find a quiet place to die. Bounder had done that when her kidneys failed but her quiet place was in the basement in Beth's old baby carriage. Anyway, she was an annoying and insane cat but we loved her and will miss her.

We now have four cats. Malibu, Kokie, Inky, and Tuttle. Malibu and Kokie were adopted from the animal shelter a couple of years ago. Malibu was dumped by her previous owners because she has a heart problem and they didn't want to take care of her. She's a grumpy old cat but gets along great with my daughter. Kokie is a younger, long-haired cat who likes to sleep on top of the TV. We got Inky back in November. He is the first male cat we have ever had. We got him as a little kitten from Mikey's Physical Therapist who had found the kittens in her back yard. Inky is the friendliest cat we have ever had. Inky and the dog are best friends and chase each other around the house. The dog likes to clean Inky which means Inky usually smells like a dog. Tuttle is a tiny little kitten that had been left outside of our vet's office. He took care of them until they were old enough to be adopted. Tuttle and her siblings were so tiny they had to be bottle fed. So we now have four cats and a dog. And Michel wants another dog!

What People Are Made Of

I got banned from posting comments on a blog. Why? Why would someone ban me, a perfectly harmless guy? Because I had the nerve to defend four women whose husbands were murdered by terrorists. Let me explain. Dawn Eden has a blog in which she discusses mostly her recent conversion to Catholicism and her hatred of Planned Parenthood. She's a friend of Michel's cousin Kevin so I generally follow her blog. She recently wrote a blog entry that attacked four women whose husbands died on 9/11. These women call themselves The Jersey Girls and try to use whatever notoriety that they have to promote issues and candidates that they believe will reduce the likelihood that others will suffer the way they have. Ann Coulter recently wrote a book in which she attacks these women, mostly because she doesn't like their politics. Ann Coulter is, mostly, a shill for Ann Coulter and has become very wealthy being nasty and cruel. Dawn quotes from Coulter's book and then makes the bizarre claim (one not even Coulter tried to make) that these four widows claim to be non-partisan and apolitical. She then goes on to say that this makes them hypocrites.

It's hard enough to lose someone you love and planned to spend the rest of your life with and then to be told that you are a witch for trying to use his death to prevent the death's of others. But to be told that you are a hypocrite is worse! Coulter is mostly just expressing her twisted opinion. Dawn is actually telling lies. I could not let that stand. I had to comment on Dawn's blog. What I told her was that what she wrote was a serious sin. For that she banned me.

As bad as that was, Dawn then called cousin Kevin to complain about me! Imagine the chutzpah to try to come between family members over something as trivial as a blog! What is especially weird about this is that Dawn writes for the NY Daily News. You would think that someone who writes for a newspaper would have a little spine and would be able to take some criticism. Dawn, apparently, only wants people who agree with her to read her blog.

Which brings to me one other thought. Why would Ann Coulter make the claim that The Jersey Girls are enjoying their widowhood? "I've never seen people enjoying their husbands' deaths so much." The only explanation that comes to my mind is the psychological term, projection. Coulter has probably never loved anyone (other than herself) enough to feel the pain that these women do. Coulter has probably never been so in love that she would give up everything for another. That is probably why she thinks that a few million dollars should make the pain go away... because it would for her.

I was reading the NY Times on Sunday and there was an article about the American automotive industry. The article talked about how GM has lost ground in the automotive sales world. At one time the Impala was the number one car in the world but today that title belongs to a Japanese car, the Toyota Corolla. The article discussed how the US automotive industry has concentrated on SUVs and has lost ground to the Japanese car manufacturers who concentrate their engineering efforts on just a few models and try to make those few models the best that they can. GM spreads their efforts to many car models across several brands thus preventing them from concetrating their engineering efforts. It was all fascinating but the one thing that made me laugh had to do with the definition of American vs. Japanese cars. As it turns out, the number one American passenger car is manufactured in Canada. The number one Japanese passenger car is manufactured in the USA. So which Americans are your car dollars going to? If you buy an "American" car, your money is going to wealthy American executives and if you buy a "Japanese" car, your money is going to middle-class American auto workers.
Posted by Tom P. at 6/06/2006 12:29:00 PM 2 comments:

PocketMod: Better than a PDA

Debra over at Deblog posted about the PocketMod, an incredibly simple and yet useful way to keep notes. The problem with a PDA or even a DayTimer is that they are bulky and hard to carry around. If I run into a co-worker in the hall and she says, "Why don't you join us at our meeting tomorrow at 2:00," the likely response is to ask her to send an email to remind me (and she might forget) or to write it down on a scrap of paper that I will promptly misplace. Or I might be out at lunch and suddenly get the feeling that I am forgetting a meeting but have no way to look it up to see when and where the meeting is being held. The Pocketmod has none of these problems because it is easy to carry around, disposable when you are done with it and best of all, free.

So how does the PocketMod work? Simple. It's as easy to carry and use as a piece of paper because... it is a piece of paper! Simply, it is a piece of paper that is organized by adding components such as a calendar or shopping list to it and then folding it a certain way so that it fits easily in your pocket or wallet. There are components such as day and week planners, diaries, to-do lists, reference cards, food diaries for dieters, and even SuDoku! You simply pick the eight components you want on your page, print it out, fold it, and stick it in your pocket. If you lose it, you can just make another. This thing is so simple that it is brilliant!