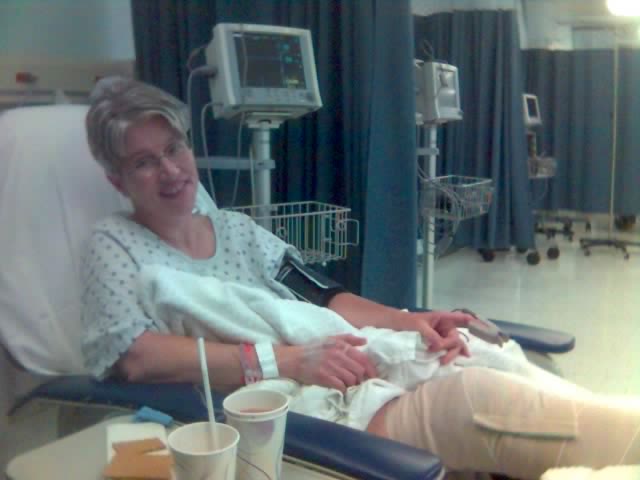 It was her knee this time. And the answer is, "no, it didn't while in recovery" and "yes, it does now". 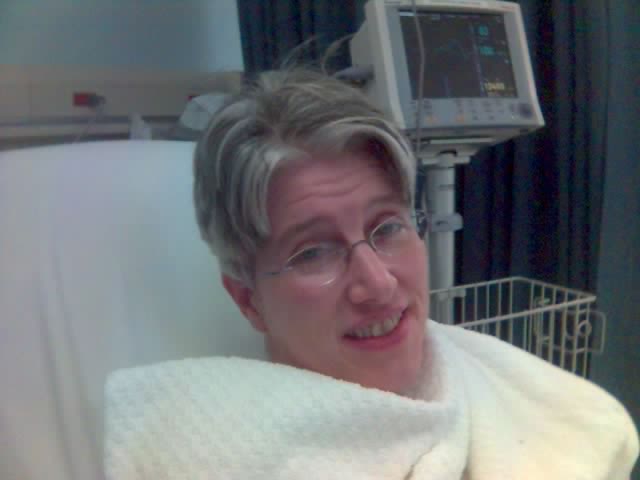 The surgery went very well and Michel is feeling better than she has in a long time. We should be home in about an hour.

The house is too quiet

Mikey isn't home. And the house is way too quiet. He is away at camp until Sunday. No therapists. No aides. Just Beth bouncing around the family room playing Dance, Dance Revolution and Michel and me trying to figure out what to do with ourselves.

On Tuesday, we took Mikey to his school to meet the bus to go up to the camp. They use these big buses with fancy seating and ceiling mounted DVD players etc. like you take when you go to Atlantic City. Last year when we took him to the bus, we couldn't get him on. He was crying and kicking and we finally decided to just drive him up to the camp. This year he was a trooper. He didn't want to get out the car when we arrived at the school so I had to carry him but he didn't cry at all when I carried him on the bus. He just sat down, crossed his legs, smiled, and looked out the window. He gave me a big kiss goodbye and that was it. We left him on the bus, Michel cried a little, and we went home.

Michel called the camp last night to check on Mikey and they said he had a great day. When they arrived, he didn't want to get off the bus, not because he didn't want to to go to the camp but because he had such a great time on the bus! He was the first up yesterday morning and had everyone outside to play soccer (or as the director who is from Wales calls it, football) by 7 AM. He even ate in the cafeteria without any trouble, sitting with the rest of the campers. The director told Michel that she sees a lot of growth and maturity in Mikey since last year.

I miss my little guy, even though a little break is good for everyone, especially since tomorrow Michel is having surgery on her knee. Yep, that's right. I'll blog more about the surgery tomorrow.

Yesterday was a bad day for me. Every once in awhile I get these days where my pulse or blood pressure drops and I'm just not myself. I spent a lot of the day confused about what exactly was going on and drifting in and out, if that makes any sense. Apparently I said something that really upset Michel and she slept on the couch. The weird part is that I have no memory of this whatsoever. I remember trying to get Mikey to sleep (he didn't fall asleep until 2 hours after his bed time) and I remember Michel being annoyed at me about something but then it's all just a blank. I feel much more myself today although I'm still a bit tired, almost like a mild hangover. For those of you who don't know, I have Vasovagal Syncope, although it has been a year since I actually passed out.
Posted by Tom P. at 8/21/2006 04:59:00 PM 2 comments: 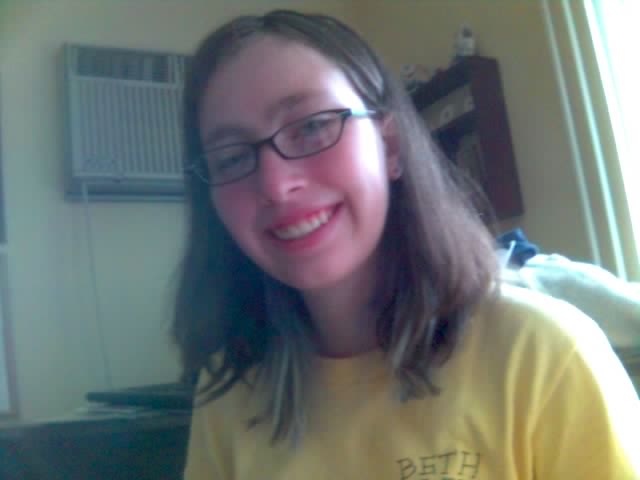 Thursday was a big a day for Beth. The braces that she has had for the last 2.5 years are gone. Her teeth are nice and straight and beautiful. Even her orthodontist was impressed at what good care Beth took of her teeth while she had the braces on. She had the braces taken off first thing in the morning so I told her she could stay home from camp but she wanted to show everyone. I'll give a shout out to Dr. Michael Katz in Plainview for anyone who is looking for an orthodontist. Beth has a retainer that she is supposed to wear at night that will help keep her teeth straight and she has been very good about wearing it so far. The best part is that Beth can now start high school without braces. How cool is that?

I'm not depressed. Really. I'm just drained. I feel like the energy has been sucked out of me. I have been very busy at work and things are crazy at home (Michel needs surgery on her knee... more on that in a future blog entry) and I just feel like I'm worn down. It's not that I'm tired. I have been taking Ambien and have been sleeping great and usually wake up alert. I just feel... drained. I'm not sure how else to describe it. I haven't even felt like doing the things that I normally enjoy. I haven't felt like blogging or reading blogs or even reading. I looked in Bloglines and I had about 2,000 entries from the-deblog that were unread. But I'm starting to feel better. Perhaps now that Michel has a firm diagnosis and I know that her knee will be fixed, I feel better. Or maybe I just have finally got tired of letting things suck the life out of me. Anyway, I have lots of things to catch up on and I'll start by re-starting The Good Soldier Svejk tonight. And I think I'll go to the library tomorrow and see if they have DVD to learn Czech.
Posted by Tom P. at 8/16/2006 09:48:00 PM 2 comments: