My neice, Alexandra, was involved in a car accident this past weekend. She was with some friends driving back to school in Maryland from a weekend in Delaware. It was about 5AM when the driver fell asleep (alcohol was not involved) and let the car (a 1992 Nissan Pathfinder) drift into a drainage ditch along the side of the road. The car flipped and rolled. Alex has a compression fracture of one of her vertebrae and may need surgery to fuse the bones. The driver has severe chest trauma (no air bags) including a broken sternum and had to have his spleen removed. The person sitting next to Alex has a head injury. The young lady who was sitting next to the driver has a bruise on her pinkie. She was the only one wearing her seatbelts.
Posted by Tom P. at 5/25/2006 05:02:00 PM No comments:

The Good Times are Killing Me

Beth made it home Saturday night but not without mishaps. She was supposed to pull in around 11PM, but the bus broke down in the middle of Vermont. It was actually the other bus that broke down (there were two buses for the trip) but their bus waited for the other bus to get replaced. Yep, they had to wait for the bus company to send a new bus to replace the broken down bus. Meanwhile the kids were out of food and battery power for their iPods and cell phones so there was almost a mutiny. And communication from the chaperones with the parents was non-existent. If Beth hadn't called us we wouldn't have known that the bus was going to be late. In fact, we didn't get an official call about the bus being late until 11:30 PM, a half hour after the bus was supposed to arrive. They finally pulled in a little after 1:30 AM. Beth was tired, hungry, and a little cranky. So we fed her and chased her off to bed. She slept just about all of Sunday with just a 45 minute break to come down and get something to eat. I didn't get to bed until about 3AM Saturday night so I was pretty cranky myself on Sunday. Michel must be a saint to put up with us!

I should add that other than that one of the girls Beth was with got homesick on Saturday and didn't want to do anything, the trip was a major success. They had fun, learned some French, ate lots of good food, danced on a party boat, and shopped, shopped, shopped. So all in all, it was a great trip. Next week she's off to Pennsylvania with her class for two days. This girl travels more than I do! 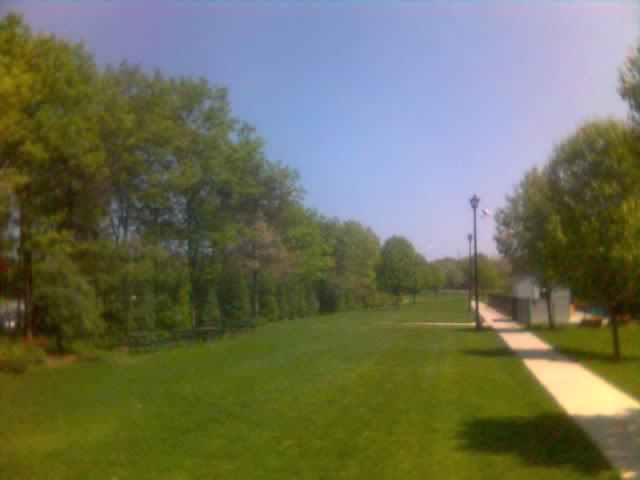 I hope Beth is having the same weather we are.

Beth changed her hair color from purple to turqoise and I was going to put a picture of it on the blog but she ran off to Quebec City! Actually, she left at 6:30 this morning on a school trip to Quebec. This was sponsored by her French class. This is the first time that Beth will be away from us for anything other than overnight so this is a huge deal for for us but especially for Michel because she is the mom. I spoke to Beth earlier today (actually she sent me a text message) and she was in Vermont. The trip is a little over 10 hours by bus. Of course, the buses are those fancy tour buses like the ones you take when you go to Atlantic City. To go on the trip she had to be at the school at 6AM, which means she had to wake up at 5 AM. How excited about the trip is she? I didn't even have to wake her up! She came in and woke me up at 4:55! Anyway, I am sure this is going to be a fantastic time for Beth and will provide her with memories that she will treasure for the rest of her life.

The Not So Special Olympics

Before I start I just want to say right up front that I know that everyone's heart is in the right place and I don't mean to sound mean or ungrateful but...

The school where the Olympics are being held doesn't have a very big parking lot but they arranged to use the parking lot of a corporate park and bus everyone over to the school. This was actually well organized. We get to the school and the bus drops us off. But they drop us off on one side of the school but the path to the track where the events are being held is on the other side of the school. Not a big deal except that Michel's parents are with us and he has a bad heart and chronic bronchitis and she has a bad knee. Then we realize that you have to walk down a huge hill to get down to the field. OK, so here we are at Special Olympics and the field is poorly accesible? Maybe this location wasn't a good choice to hold the events.

Anyway, we get down there and they assign three very nice girls to help with Mikey. They are all high school seniors and they are all volunteers. The only problem is that they have had no training, no explanation of what is expected of them, no idea how to handle a child with autism. They mostly just follow me around. So we get where we are supposed to be with a few minutes to spare before the parade is supposed to start. Michel, Beth, and Michel's parents are waiting in the stands while Mikey, the girls, and I are waiting for the parade into the main area to start. And we wait. And we wait. And if I tell you that Mikey is not good at waiting would you be surprised? We waited for an hour and Mikey is bored, tired (we had to wake him up early to be there on time), and misses his nana and pop-pop. Finally we march in and they want us to stand in the middle of the field and listen to a bunch of local politicians give speeches! At this point I am ready to scream and while Mikey is doing his best to be good this is asking a huge amount from a 9 year old boy.

So Mikey and I just wander off to where we think his event will be. Michel finds us and steers us into the right direction. We get there about the time the National Anthem is playing but they are still not ready for Mikey's first event, the 50 meter dash. I am exhausted because Mikey mostly wants to be carried everywhere plus my back and right knee are killing me. Mikey is tired, bored, and ready to go home. Finally, someone shows up with lists of names on multiple pieces of paper but they are the wrong list and he wants everyone to line up. Mikey sits in the chair next to him and hits him.

The problem appears to be that he has no clue how to handle children with disabilites. He seems to expect a bunch of children with autism to neatly line up and follow his instructions while he looks up names on a bunch of lists. One woman told us that the events she has been to, they just line up all the kids and have them run and worry about names later. They are making this very difficult for the kids by dragging it out and wasting whatever ability to keep themselves under control that they have. Finally we just decide that we have all reached our limit and we call it quits. Mikey gladly went over to nana and gave her a huge hug and then he sat on her lap and put his head on her chest.

Getting out was another problem. Remember the hill we had to walk down to get to the field? Well now we had to walk up that hill. Michel's father made it about half way up and just ran out of gas. There were a lot of EMT's with wheelchairs around so she went to ask if one of them could help him up the hill. Meanwhile Mikey and I kept going and we ended up on a bus heading back to the parking lot. Mikey jumped on the first empty bus but the driver wanted to get back to the parking lot to pick up some people in wheelchairs (it was a wheelchair accessible bus) so were on our way before anyone else caught up to us.

The EMT's deciced that they didn't want to help Michel's father because they were only there for emergencies! So if he had a heart attack walking up the hill they might do something but to prevent him from having a heart attack we were on our own. Jerks! Anyway, Michel's father did manage to walk up the hill by taking his time and stopping a few times to catch his breath.

When we got home we had a nice family party for Mikey's First Olympics. So overall our first Special Olympics experience was less than we were hoping for. Hopefully, next time will be better. 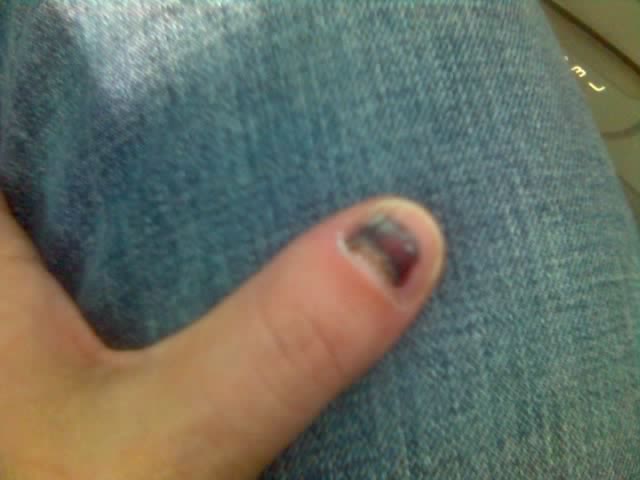 This is what you get when you let a klutz use a hammer.

When we were out shopping at Tower records on Sunday, I spotted this album by Modest Mouse. I had heard of them from somewhere and had picked up the album to buy it about half a dozen times but never pulled the trigger. I asked Beth if she had ever heard of them and she said they are a good indie group and she had bought one of their songs on iTunes. So I bought the album. It isn't for everyone. They are different and probably would scare off a lot of people. The "hit" song from the album, Float On, is not typical of the songs on the album so if you had heard it on fuse I would recommend listening to a few of their songs on iTunes or Amazon before buying. I am enjoying it and it would be in my CD player except I'm driving the van (Michel is driving the Volvo) so I don't have a CD player! Arghhh!
Posted by Tom P. at 5/02/2006 01:03:00 PM No comments: