So I went on a search for backup software and found NTI Shadow 2. The best part is that it only costs 99 cents (at least until midnight California time, New Year's Eve). So now I am backing up the "My Documents" folder of our computer on Beth's hard drive and the "My Documents" directory of Beth's computer on our hard drive. I am also looking at IBackup as a possible solution. There seems to be a mix of good and bad about it (plus it costs $10 per month). Of course it does give you access to your files from anywhere on the internet which may be a good or bad thing depending on how secure the data is being held.
Posted by Tom P. at 12/31/2005 10:16:00 PM 1 comment:

would have no luck at all. The hard drive on our PC decided to have a mechanical failure. This isn't one of those easy to recover from failures but a hardware crash that means the data is lost. What data? Everything. Yes, I know I'm a programmer and should know better than not backing up my data but I didn't so stop nagging. I even had two hard drives in that PC and the one that failed is the one with the irreplaceable data. Michel lost all of her graduate work. We lost all of our emails. This means that if your email address was on our optonline account, we don't know what it is anymore. So tonight I'm going to buy a new hard drive and start the laborious task of reloading all our software onto our PC. And this time I'm going to buy a couple of USB Flash Drives so that we can keep backups of everything we do. Just shoot me.
Posted by Tom P. at 12/28/2005 04:16:00 PM 2 comments: 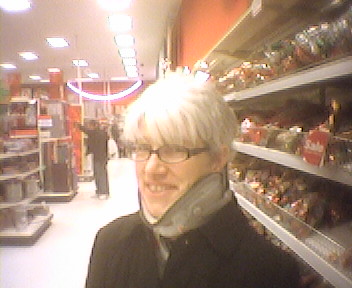 Michel had an incident last week. We had to have an ambulance come to the house and take her to the hospital. She was feeling very dizzy... so dizzy that she couldn't even walk. We were afraid it was something related to her brain. The doctors did a few tests and decided that it was an inner ear viral infection. The prognosis? She'll be better in a week or three months or anywhere in between. Meanwhile she is walking around trying to keep from toppling over. Her doctor put her out of work for a couple of weeks and I think that upset Michel more than anything else.

The shots to reduce the pain have worked well but now the other side is bothering her more. She starts those shots in a couple of weeks. In the picture you can see she is wearing her neck brace (sorry for the quality... it was my camera phone). The neck brace helps reduce the pain. Everytime we go driving anywhere Michel complains about the pain if the car jerks and she has been throwing up because of the vertigo. I just want her to be better. But this isn't getting better and it may never get better.

I have been very bad about posting to my blog and I have so much backlog. So let me catch up a little. Back on December 7th we had an appointment to see George Capone, M.D., at Johns Hopkins. He is the Director of the Down Syndrome Clinic and he has been following Mikey since he was a baby. He is also one of the leading experts (if not THE expert) on the dual diagnosis of Down syndrome and Autism. We broke the drive down into two days by staying at Michel's sister's house Tuesday night. She lives right by Trenton so it leaves a drive of about 2-2.5 hours. We got to the clinic early even after taking two rest stops during the drive down. Dr. Capone was thrilled with the way Mikey has improved since our last visit. Mikey was great. He sat on the floor, played games, watched his DVD, signed his needs... it was great especially compared to last time we were down to see Dr. Capone. The medications combined with the ABA have definitely been working. Dr. Capone dcecided that since we have psychiatrist that Mikey is seeing on a regular basis now, that he doesn't have to see us for a year! If we need his advice we can exchange emails with him. meanwhile he gave us some suggestions for further medication changes that should help Mikey even more.

We really are seeing a huge difference with Mikey. He is much more attentive in school. He is actually learning school material and not just "life skills". His new school, AHRC has been great. I dropped him off last week and everyone knew him when he came in. One of his therapists told me that Mikey is her favorite student. He's like the little mayor of AHRC. This is a HUGE improvement over the Rosemary Kennedy School where he was originally going to go. There was an article in the paper about the school's use of "detention rooms" which are little more than dark, padded closets:

Based on Mikey's behavioral issues, there is no doubt that they would have locked him up in there. At AHRC it has been nothing but wonderful.